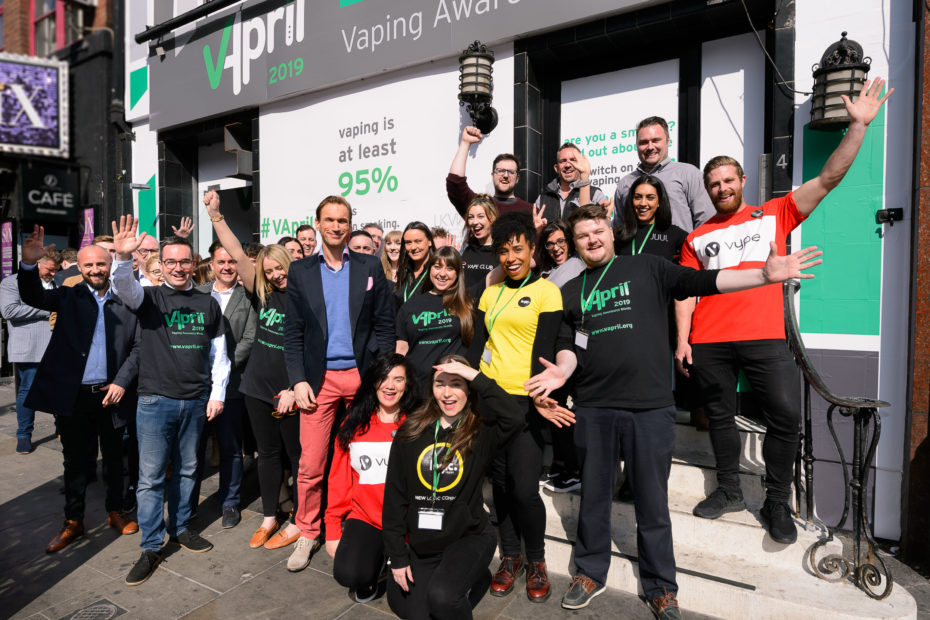 TV Doctor, Christian Jessen has called on the medical profession to help grasp the public health prize presented by encouraging smokers to switch to vaping.

Dr Christian, famous for his work on Channel 4’s ‘Embarrassing bodies’, says that despite clear advice from public health bodies and a growing bank of research about the positive impact a switch to vaping could have on smokers, the medical profession is still reluctant to encourage smokers to make the switch.

Launching the campaign at a special VApril event in Leicester Square, which saw 140 London smokers try out a vaping masterclass to start a ‘Switch On to Vaping Plan’, Dr Christian said:

“We’re in danger of missing out on the huge public health prize of a smoke-free society if the medical profession doesn’t start encouraging smokers to take up vaping. Vaping has so far helped 3.2m vapers either quit or reduce smoking, saving the NHS billions in treating those with smoking related health conditions.

There is a growing bank of evidence which shows it can reduce smoking relating harm and yet despite that, more than half of hospitals across the UK ban vaping on their grounds. It’s time we were consistent and gave clear advice to smokers to help combat the misinformation they are all too often bombarded with about vaping.”

The call from Dr Christian follows the publication of a new study to mark the launch of the VApril campaign, a month-long educational event to encourage smokers to make the switch to vaping. The study, conducted by OnePoll, shows that smokers who switch to vaping say that the best things for them about making the switch are that they feel healthier (47%) and nearly a third (31%) of vapers said that the reason they made the switch was because of personal health reasons.

More than two-thirds of vapers (68%) said that they never thought they would quit smoking until vaping came along, with many having tried a variety of other nicotine replacement products that are available on prescription.

“To me vaping is the only thing that actually stops me from picking up a cigarette and lighter. I have no intention of smoking again.

“Those who still smoke should just switch to vaping. It saves lives, becomes a way of life and well, you will love it. It’s a year since I stopped smoking and I can smell better, taste my food, walk up hills without having to stop, my skin is glowing, I no longer smell of stale smoke and overall I feel a whole lot healthier.”

The study, commissioned by the UK Vaping Industry Association (UKVIA) and the widest to date into the health, financial and social benefits of vaping found that vapers make an average saving of £346 a year compared to when they were smoking. Based on the 3.2m vapers across the country this equates to an annual saving of £1.1bn

John Dunne, a director of the UKVIA, which runs the VApril campaign, said:

“There are still almost 7 million smokers in the UK that are putting their own and the health of those around them at risk. That needs to change. But to do that we need education on a significant scale, not just to smokers, but to the wider public too, to provide vapers with the support to make the switch. It’s sad that despite the clear benefits to their health and the health of those around them, nearly 80% of vapers reported feeling judged for vaping.

“That’s the point of the VApril campaign. By countering the misinformation around vaping we can encourage more smokers to Switch on to Vaping so that we can start to make a smoke free society realistic.”

Smokers who want to make the switch as part of the VApril campaign, should go to www.vapril.org where they can sign up for a VApril Masterclass at selected stores across the UK or download the ‘Switch on to Vaping’ plan, that has been developed by vapers, for smokers, thanks to the independent charity the New Nicotine Alliance.

previousVApril is back – TV Doctor speaks up for vaping to encourage UK smokers to quit
nextWhich types of devices are best for someone making the transition from smoking to vaping?